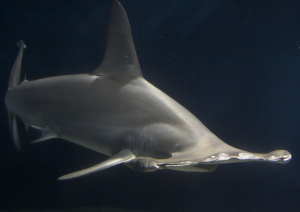 A quick glance at this shark species will give you a clue as to how it got its name. The hammerhead shark group are identified by their unusual and distinctive head structure. Their heads are flattened and laterally extended on either side into a hammer-like shape called a cephalofoil.

The life expectancy for hammerheads is between 20 and 35 years.

They average in length from 3 feet (0.9 metres) to about 13 feet (4 metres). The maximum length known is attributed to the Great Hammerhead Shark.  When fully grown, it can measure up to 20 feet (6 metres).

Due to the fairly small size of most hammerheads, they are generally considered harmless to man and are not known to attack humans habitually. Although, like most carnivorous animals, they can be aggressive in close contact. The Great Hammerhead, in particular, poses a threat to man owing to its large size, aggressiveness, and fierceness. However, few attacks have ever been recorded to date.

Reproduction is viviparous and occurs once a year. Mating takes place with the male biting the female violently until she concedes to mate with him.

The male transfers sperm to the female through claspers leading to conception. The embryos develop within the mother’s body and are born alive in a litter of about 12 to 15 pups for other species and 20 to 40 pups for the Great Hammerhead species. After birth, the baby sharks are not cared for at all by the parents. The babies huddle together and swim to warm waters till they grow old enough and large enough to survive in the wild on their own.

The bonnethead shark in particular displays a unique reproductive trend at it was discovered to be capable of asexual reproduction in 2007. This was the first recorded instance of a shark having this ability.

Hammerhead sharks eat a variety of prey including fish, squids, octopi, crustaceans, and even other sharks. Their pattern of hunting is to swim along at the bottom of the sea stalking their prey from under. They use their sensory organs to detect electrical fields from potential prey and also use their uniquely shaped heads as a weapon of attack. The fact that they can make very quick and sharp turns and bends give them an edge also. They particularly favor stingrays and attack them with their heads then pin them to the sea floor till the fish are too weak to fight.

Again, The Great Hammerhead, being larger and more aggressive will occasionally engage in cannibalism, by eating other hammerhead sharks, and even its own young.

10.  Alternative Names For The Hammerhead Shark

The constant demand for shark fin soup has been linked with the sharp decline in shark populations especially the Hammerhead sharks. In fact, the scalloped hammerhead shark became the first species of shark to come under the protection of the U.S. Endangered Species Act.

In other regions like off the coast of South Africa, reports indicate population decline of up to 99% and sharp declines too along the coast of the northeastern U.S.A.

Depending on the species of hammerhead, they inhabit temperate or tropical waters all around the world. Their favourite dwellings include coastal lines and continental shelves. They dwell at the Mesopelagic zone, between 660 feet (200 meters) to 3300 feet (1000 meters) beneath the ocean surface and are common in waters up to 80 meters deep.

Their most common habitats remain reefs of shallow waters, and they occasionally visit brackish waters.