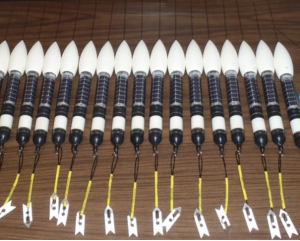 An Array Of Satellite Pop-Up Tags

Shark tagging remains a controversial issue in the marine world. There are many arguments for and against it. Some researchers believe it’s harmful to sharks and does no good. On the other hand, others strongly believe the data they gather will provide valuable information regarding shark conservation status, distribution, habits and so on.

Though each party has valid points, here is the unbiased information you need to know about the risks of shark tagging.

What Is Shark Tagging?

Shark tagging is a research technique where specially designed tags are attached to sharks. There are many different types of tags, and they all serve as a research tool. Each tagging venture is a scientific process with unique objectives.

How Do The Tags Function?

As earlier mentioned, there are many types of tags used for shark tagging. The simplest are Dart Tags which are placed at the base of a shark’s dorsal fin. PIT (passive integrated transponder) tags are another type that is inserted into the dorsal muscle of the shark, implanted via a shallow incision. Both methods require recapturing of the shark to obtain data. Satellite tags such as SPOT (Smart Position or Temperature Transmitting) tag and PAT (Popup Archival Transmitting) tag uses radio waves for data transmission, allowing near real-time tracking.

Tagging sharks allow researchers to obtain valuable data regarding their natural behavior. The data ranges from the movement of sharks to the depth of their dive, etc. Such information enables researchers to track them in real-time and identify their migration patterns retrospectively.

This plays a significant role in understanding shark behavior as well as in conservation efforts. For example, combining data from tagged sharks with data from Vessel Monitoring Systems (VMS) allow authorities to set protection boundaries. Data from tagged sharks show areas where they aggregate whereas VMS tracks the movement of fishing boats.

The Major Risks Of Shark Tagging.

1. It Provides Information To Poachers And Overenthusiastic Shark Lovers.

Just as the tracking devices provide valuable data for researchers and conservation authorities, the same data can be violated and abused by poachers and hunters.

BBC News reported many incidents where hunters used radio signals emitted by the tags to pinpoint the location of tagged sharks. Avid nature fans meanwhile, use the data to encroach the habitats of non-endangered species, thus skewing the animals’ natural behaviors.

However, the greatest risk to tagged sharks is from fishing vessels. In a study by Professor David Sims and other researchers at the Marine Biological Association, they discovered that the movement range of tracked blue and mako sharks overlapped with the capture range of fishing vessels about 80 percent of the time. This study covered a period of four years from 2005 to 2009.

This data correlates to statistics showing that blue and mako sharks are the most heavily fished species. You can read more about that study here.

2. It Often Poses A Health Risk To The Shark.

Besides the risks of tracking, the tag itself could become a hazard to the shark.

The tags are liable to damage and fouling. One study suggests that SPOT tags may lead to irreversible damage. Interestingly, the adverse effects on shark fins vary with duration of attachment. Fouling can occur within 12 months of attachment followed by permanent damage by 24 months.

3. There Are Cosmetic Implications From Fouled Tags.

The unappealing look of fouled tags makes the shark tagging program quite infamous.

There is an undeniable rise in ecotourism where more and more tourists are willing to pay a premium price to view animals in their natural habitat. This leads to increased encounters with tagged sharks.

These ecotourists will invariably notice some sharks swimming with fouled or damaged tags, impaired locomotion, and infection. Obviously, such damage is directly linked to the tagging procedure or the tag itself. The tourist would then take it upon themselves to remove the tags and discard it, along with the valuable data the tags contain.

What Is The Final Verdict?

Tagging sharks undeniably puts them at risk. They can be tracked by parties looking to harm them such as poachers and hunters. Even the tagging procedure itself causes injury to the sharks. However, tagging provides researchers and conservation bodies valuable data to manage the rapidly declining population of the endangered species. It is one of the most effective ways to collect accurate and reliable data without disrupting the natural activities of the sharks. In this case, the benefits outweigh the risks.

Apparently, there has to be a middle-ground approach for the good and preservation of these majestic sea animals.

So, how do we find this middle-ground?

Fortunately, this research paper by Hammerschlag et al brilliantly outlines a decision tree for researchers when encountering an electronically tagged animal. They proposed a list of options and consequences of each action to assist in making a decision. This is one example of the many resources available for making informed decisions when researchers encounter a tagged aquatic animal.

Finally, we can’t ignore the unparalleled potential proper shark tagging provides for information gathering regarding shark existence and survival. Because ultimately, if the sharks become extinct, there will be nothing left to protect anyway. All stakeholders must come to a consensus on this issue.