Although many sharks are adventurous eaters, Tiger Sharks in particular have a very unusual palate.

It’s Hard To Believe But A Tiger Shark Was Found With A Suit Of Armor In Its Stomach.

Of all marine animals, sharks arguably have a reputation for the animal with the most varied diet. Furthermore, these are animals with large appetites. Therefore, they will spend most of their day, or night, actively searching for prey to munch on.

As a result, sharks tend to be curious hunters and feeders: they will search out items in the water around them to determine if such objects are edible or not. Tiger Sharks  in particular are known for many of the absolutely weird items they will eat. Consequently, they are believed to have the most varied of diets among the sharks: almost anything goes.

Also, when you add their excellent eyesight, special sensors and ability to hunt at night to the mix and you’ll quickly see why they are such successful hunters. They are eating anything from small fish to sea snakes and even other sharks.

Unfortunately, careless human activity means that an infinite number of foreign and often non-biodegradable objects are entering into the waters. And tiger sharks are biting.

This shark species have been found with some unbelievable items in their bellies! If you’ve ever wondered why Tiger sharks are called the “garbage can of the sea,” read on.

Here are some of the weirdest and crazy things sharks have ever eaten: 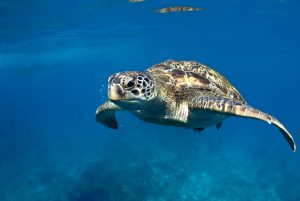 While they are juveniles, tiger sharks will eat a variety of small fish, octopus, mollusk, etc. but as they grow older (and bigger) they become more adventurous with their pickings. Adults will venture further offshore while hunting. They’ll add oceanic mantas, about 20 different species of smaller sharks, and different rays to their menu.

Some unexpected creatures they’ve eaten include:

Several Dog Breeds Have Been Found In Tiger Shark Bellies.

Up to eight types of terrestrial mammals including:

Some Little Girl Is Probably Wondering What Happened To Her Barbie Doll.

Now this where it gets really weird. Check out the following objects found in Tiger sharks:

Watch the video below by Stuart Cove’s Dive Bahamas.

Tiger Sharks And Human Flesh: Yes Or No?

Surprisingly, despite the whole “vicious man-eater” myth, researchers hardly ever see human flesh or bones in tiger shark stomach contents. Only on two occasions ever have they seen human bones in a tiger shark over a 30-year period.

Although it’s possible that if the sharks did eat human flesh, it could have digested long before the specimen was found.

Whatever the case, this confirms the fact that sharks eating humans is extremely rare indeed. They don’t actively swim around looking for the next human to eat.

Their Feeding Habits Make Them More Vulnerable To Dangerous Bait

Unfortunately, their inquisitive feeding nature makes them especially prone to baited nets and drumlines. For instance, we had talked about the Australian Shark Cull that was targeted at great whites but ended up causing the death of at least 63 large tiger sharks.

Compared to many other sea creatures that would avoid the bait and swim away, Tiger sharks would attempt to eat the bait and subsequently get caught. During the Australian cull, at least 75 percent of the killed sharks were tigers.

That’s another reason why these so-called control measures are actually detrimental to the marine ecosystem.

Humans Need To Be More Accountable For The Environment.

It may sound funny to discover that tiger sharks are eating all of these items but it really isn’t. Because every one of these objects is potentially dangerous to the shark in question.

Many of them will swim around with these objects in them for decades until they eventually die or are killed.

These weird finds tell us something: our trash is going where it shouldn’t. Actually, it’s a direct indication that many people have little to no regard for the environment especially the oceans.

We need to be more cautious and disciplined with our waste disposal habits.