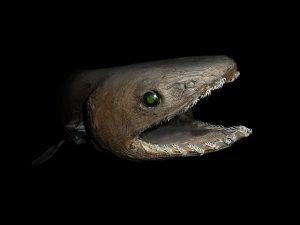 The snake-like frilled shark is a very rarely seen deepsea shark that lives in patchy distributions in the Atlantic and Pacific Oceans.

The name ‘frilled shark’ comes from the frilly appearance of its six pairs of gills. Though the habits of this shark are not well-know yet, it likely catches it prey by lifting its head, bending its body, and striking forward.

The gestation period may be as long as three and a half years, the longest of any vertebrate. Litter sizes vary from two to fifteen, and there is no distinct breeding season.

Though frilled sharks are occasionally caught as bycatch in commercial fisheries, they have little economic value.

They’ve never been kept in captivity for long and estimating its lifespan in the wild is also difficult as it’s such a rare species. Still, it may live for up to 25 years. 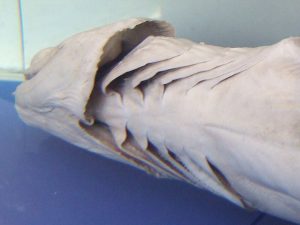 The frilled shark is a slow moving shark and it swims weakly.

Since humans rarely encounter the frilled shark, it safe to say that it poses little danger to people. But, it has rows of needle-like teeth so it’s best to be cautious around it.

Deepwater fisheries catch it occasionally as bycatch but they don’t target it directly. When caught, the fishermen offer its meat fresh or processed into fishmeal. However, it’s of little commercial worth.

This shark reproduces by aplacental viviparity, thus its embryos are nourished from the egg yolk and are born live. Also, it has the longest recorded gestation period among vertebrates: about 3.5 years!

9) Diet/Hunting Pattern Of The Frilled Shark

The frilled shark has about 300 needle-like teeth, perfect for catching prey such as soft-bodied squid. In addition, it has a distensible jaw and very wide gape for its size. No doubt, that’s a combination that allows it catch, and swallow prey of considerable size.

Its preferred diet includes: octopus, squid, bony fish, and even smaller sharks like the Japanese catshark.

Interestingly, though it’s a slow swimmer, it feeds mostly on fast-moving squid. Therefore, experts believe the likely hunting strategy is to target sick, injured, or tired squid. It could also surprise prey by staying still, then striking quickly like a snake.

Possibly, this species can create negative pressure by closing its gills and thereby suck prey whole into its wide mouth.

It is regularly caught by bottom gillnets and midwater trawls in Suruga Bay, Japan. Though it’s not a direct target of fisheries, the fact that it’s regularly caught as bycatch coupled with its low-birth and long gestation period, makes it particularly vulnerable to overfishing.

As a result, the International Union for Conservation of Nature (IUCN) had previously listed the frilled shark as Near Threatened. It was down listed as Least Concern in 2016.

The first time this shark was caught on camera in its natural habitat was in August 2004, off the coast of southeastern USA.

This shark is so unique that it’s placed in a family of its own. Just like the cowsharks, frilled sharks have features similar to those of what’s considered as the oldest groups of sharks alive today. Some of these features are the extra gills (most other sharks have five), wide gaping mouths, and spineless back fins.

Because of these ‘ancient’ features and since it’s the only surviving species in its family, the frilled shark is known as the ‘living fossil.’

The frilled shark dwells in many widely scattered patches of the Atlantic and Pacific Oceans.

It swims in the waters off Norway, Scotland, and western Ireland. Other sightings are from France all the way to Morocco. Then, southern Brazil, off New England, and Georgia. It’s also seen around West Africa, Japan, Australia, California, and so on.

Interestingly, there was only one recorded species of the frilled shark till 2009 when a closely related specimen was caught off the Namibian coast. This new species is known as the Southern African frilled shark, though it has a longer head and longer gill slits.

Some cryptozoologists suggest that there may be a larger relative to the frilled shark either extinct, or still alive swimming somewhere deep in the earth’s oceans.

Could that explain the numerous and persistent ‘sea-serpent’ reports and sightings over the years?