Meet the Lemon Shark. The most well-known and researched shark in the science world so far.

A Large Lemon Shark. Though Very Powerful, They Rarely If Ever Attack Humans. As Usual, Always Exercise Caution Around Wild Creatures.

The Lemon Shark is a powerful fish with a stocky build. These sharks are particularly fond of social living and they are commonly seen in same-sex, same-size groups. One interesting detail about these groups is that these sharks are relatively peaceful and they don’t fight or attack each other.

Lemon sharks have a yellow coloring (for perfect camouflage in sandy areas), and a flattened head with a short, rounded snout, and two large dorsal fins. They are very sensitive to vibrations in the water around them thanks to the ampullae of Lorenzini receptors in their heads. As a result, they hunt perfectly at night even in pitch darkness.

They are of minimal threat to humans, and they are currently listed as Near Threatened by the IUCN.

The maximum reported age for lemon sharks is 25 years in captivity and up to 30 years in the wild.

Lemon sharks do not represent a serious threat to humans. Though, they may cause injury to humans with bites if they feel threatened. The few times this has happened is when researchers are handling live sharks or when divers disturb them in the water.

For now, there is no record of a human fatality caused by a lemon shark.

The lemon shark is typically “accommodating” and will not bite humans unless it feels threatened.

Mating occurs during the spring months annually and kicks off with adults congregating at special mating grounds.

As with many other shark species, male adults will bite the females till they agree to mate. Fertilization is almost immediate and these sharks are viviparous: nutrients pass to the embryo through yolk-sac placenta and the young are born alive.

However, the female lemon shark is polyandrous and sperm competition occurs. They can store sperm in an oviductal gland for several months before fertilization. Gestation period is between 10 and 12 months with a litter of up to 18 pups with multiple paternity.

They reach sexual maturity at 6.5 years. 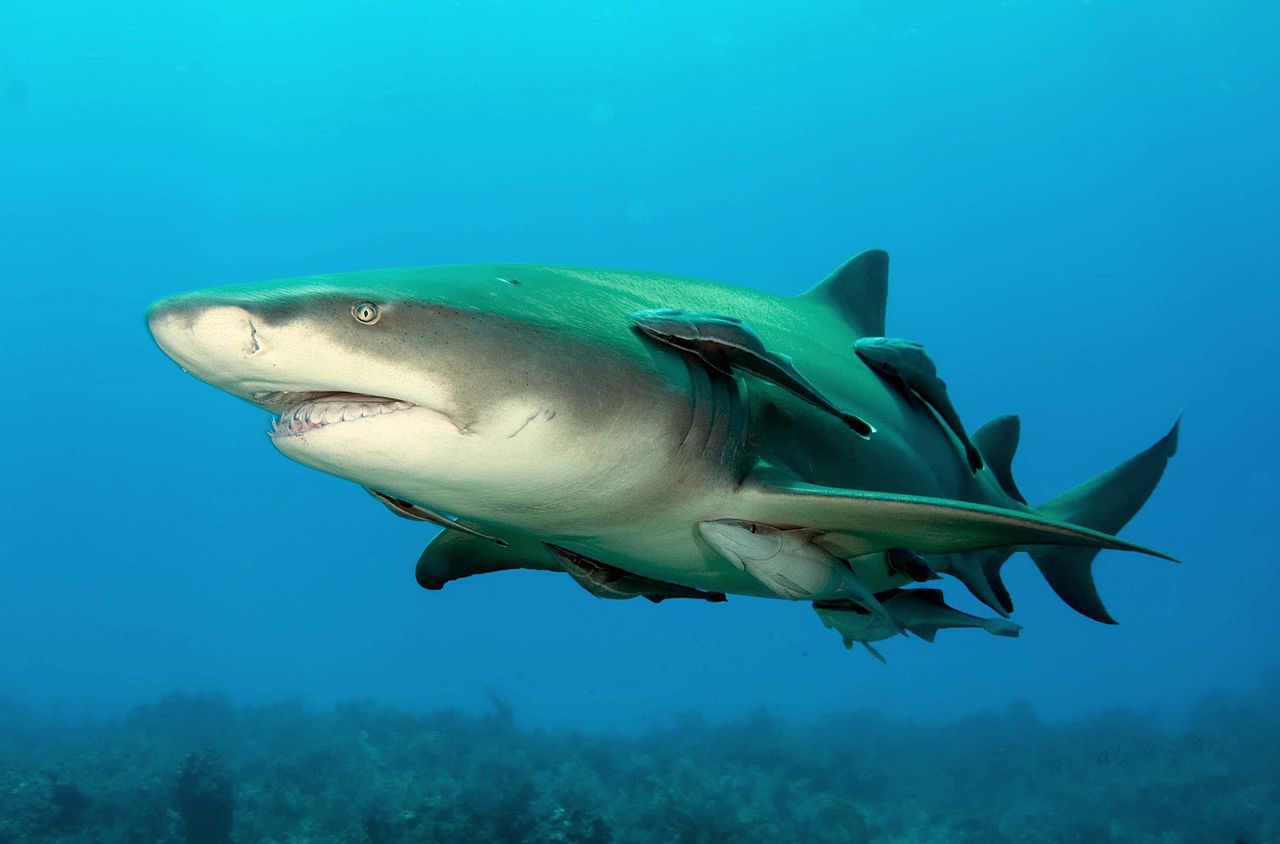 9) Diet And Hunting Pattern Of The Lemon Shark

These are very selective eaters unlike many other shark species, for example the tiger shark.

Though the lemon shark is piscivorous (feeding on fish), it displays distinct preference for certain species and size of prey. They also tend to prefer prey when they are more abundant and available. These sharks feed selectively on species that are slower and more easily captured by using a stalking technique. Some examples of such prey are the parrot fish and mojarras.

Their very sensitive detection skills allows them to hunt perfectly at night. Some of their favorite prey are bony fish, mollusks and crustaceans. They’ll also occasionally catch sea birds and even other small sharks.

This species hunts by quickly approaching prey and before making any physical contact it stops abruptly. It will then hit its victim, bite and hold it tightly around the head and shake it repeatedly until it can tear off pieces of flesh.

Once a lemon shark draws first blood from its prey, the scent triggers a feeding frenzy. Other members of the group will quickly swarm to eat.

The exact population trend of the lemon shark is currently unknown. Although it’s currently not considered to be under risk of extinction, it still shares some threats with other shark species of similar size.

That’s because its meat, liver, skin, and fins are highly valued commercially. Along the U.S. Atlantic Ocean, the Caribbean coast, and in the eastern Pacific Ocean, this shark is still highly sought after for the products made from its body.

For instance, lemon shark skin is commonly used for leather and its meat is considered “firm and tasty,” a delicacy in many regions.

Some particular populations currently facing serious decline include: the western Bahamas, the western north Atlantic and the eastern Pacific Ocean.

Unfortunately, there’s no specific conservation measure in place for this species.

The IUCN currently lists it as a Near Threatened species.

Humans are the number one predator of lemon sharks. Other larger sharks may also prey upon juvenile lemon sharks. Adults of this species have few if any predators.

This shark frequents the waters of New Jersey (USA), Southern Brazil, and many parts of the Atlantic Ocean. You’ll find groups of them off the coast of West Africa and in the Southeastern Atlantic.

They can also be found in the Eastern Pacific from Southern Baja California to Ecuador.

Lemon sharks select warm and shallow habitats with a rocky or sandy bottom. Their remarkable adaptability and hardiness allows them to withstand deep water with little oxygen.

Lemon sharks often occupy the subtropical shallow waters of coral reefs, mangroves, enclosed bays and river mouths. They are however also found in open oceans to depths of 92 meters (302 feet).

They may swim up river but will never travel far into fresh waters.

The shark’s yellow coloring serves as a perfect camouflage when swimming in the sandy seafloors of its preferred coastal habitat.