The megamouth shark is a species of deepwater shark that is rarely seen by humans. Few have ever been sighted since its discovery in 1976 till date, and it’s the smallest in size in the group of three extant planktivorous (still surviving, plankton-eating) sharks which include the basking shark and whale shark. It’s so unlike any other shark and is unique for its large head and rubbery lips. 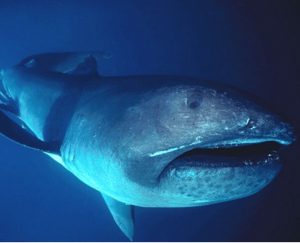 Sadly, due to its elusive behavior, the life expectancy of a megamouth shark remains unknown. But for now, the life span of those observed so far is determined by counting the growth rings sported on its vertebrae.

The megamouth shark is a gentle giant that sports no threat to human beings. And so far, no attack on man has ever been recorded. This can be attributed to the fact that the shark is not built for the kill but is rather a filter feeder.

This shark is an ovoviviparous breeder. In this form of reproduction, the eggs develop and hatch in the mother’s body. It gives birth to live young though the exact number of litter is yet to be determined. The pups get nourishment from the placenta, so it’s no wonder that they come out when they’re already well equipped to take care of themselves.

For the megamouth shark, it attains sexual maturity when the shark reaches the length of 4 meters.

This shark belongs to the filter-feeders group. It swims with its mouth wide open ready to filter water for plankton, shrimp, jellyfish, and copepods. Megamouths have luminous photophores (glowing pores) around their lips. A feature that is believed to help it lure plankton and small fish.

10. Alternative Names For The Megamouth Shark

The other popular English name for this shark is the big mouth shark.

This shark is a rare species. Only 61 specimens have been recorded so far. The lack of data about this shark has inhibited the implementation of any proper conservation measures.

The megamouth shark is believed to have come into existence during the Tertiary period dating back 35-65 million years ago. It rose from the Mackerel lineage of sharks that evolved from being predators to filter feeding plankton.

The megamouth shark inhabits the temperate and tropical areas of all the main oceans: Pacific, Atlantic and Indian Oceans. However, the highest number of captures has been in the waters surrounding Asia, particularly Taiwan, Vietnam, Japan and the Philippines. Other sightings have been around Australia, parts of Africa, Mexico, Hawaii and California. This shark is a fish of the deep, which prefers moderate to warm temperatures. It’s found in depths of between 150 to 1,000 meters.

The megamouth shark remains one of the most sensational discoveries of the 20th-century.