Despite the erroneous belief that sharks are bloodthirsty man-eaters, the Nervous Shark is one species that is actually afraid of humans.

The Nervous Shark Is Very Wary Of Humans And Will Avoid Them As Much As Possible (Author: CSIRO National Fish Collection cc by 3.0)

The Nervous Shark is a commonly seen requiem shark native to the waters around northern Australia and surrounding areas. It got its common name because of its timid behavior around humans.

This shark is targeted for human consumption and is frequently caught as bycatch by coastal gillnet fisheries, line and trawl fisheries.

The IUCN lists it as Data Deficient except in Australian waters, where it’s listed under Least Concern.

About 12 years for males and 16 years for females of the species.

The nervous shark is harmless to humans and will avoid them however possible in the water. It is very shy and difficult to approach.

The Nervous Shark is particularly wary of humans and will avoid them in water.

Like its fellow requiem sharks, the nervous shark is viviparous. Embryos receive nourishment from their mother once they exhaust their initial supply of yolk.

Courtship starts with the male biting the female. After mating, females can store the sperm for up to four weeks before fertilization.

Though the mating season varies depending on the location of the shark population. At Darwin Harbor it’s from January to March and at Shark Bay it’s from late October to early November. Gestation lasts from 8 to 11 months.

Litter size ranges from one to six pups with the newborns measuring from 35 to 40 cm (14 to 16 inches) long. Juveniles mature sexually at about four years for males and six years for females.

8) Diet/Hunting Pattern Of The Nervous Shark 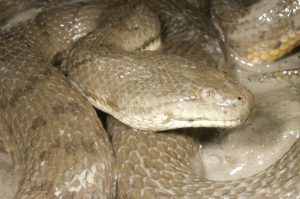 The Dog-Faced Water Snake Is A Common Prey Of The Nervous Shark (Author: Author    Mark O’Shea cc by 3.0)

This shark feeds on small fishes like silversides, smelt-whitings, and grunters. It will also eat crustaceans, and molluscs.

Surprisingly for such a timid shark, it frequently hunts and eats sea snakes and semiaquatic serpents.

Although it avoids humans, it’s frequently caught and marketed for its meat.

Commercial fisheries working off northern Australia tend to catch it in the course of their operations.

Nevertheless, this shark is not considered as threatened in any way. The Australian population of nervous sharks is listed as a Least Concern species while it’s listed as Data Deficient elsewhere.

The Australian ichthyologist Gilbert Percy Whitley first recognized and described the nervous shark as a subspecies of the dusky shark in 1945. He named it scientifically from the Latin words cauta, which means “cautious” in Latin, because of its skittish behavior when confronted by people.

Other scientists later recognized it as a distinct species.

The nervous shark is most closely related to the blacktip reef sharks.

You’ll find this shark mainly over the continental and insular shelves off northern Australia. That’s from Shark Bay in the west up to Moreton Bay in the east. Also, it inhabits the waters off Papua New Guinea and around the Solomon Islands.

It is a common species in Darwin Harbor, the Gulf of Carpentaria, and Shark Bay.

Wherever it swims, it prefers shallow inshore waters, and mangrove-lined areas with sandy-muddy bottoms. It’s commonly found in waters about 45 meters (148 feet) deep.