Meet one of the largest coastal sharks on Earth but one of the safest to swim with, the Sandbar Shark. 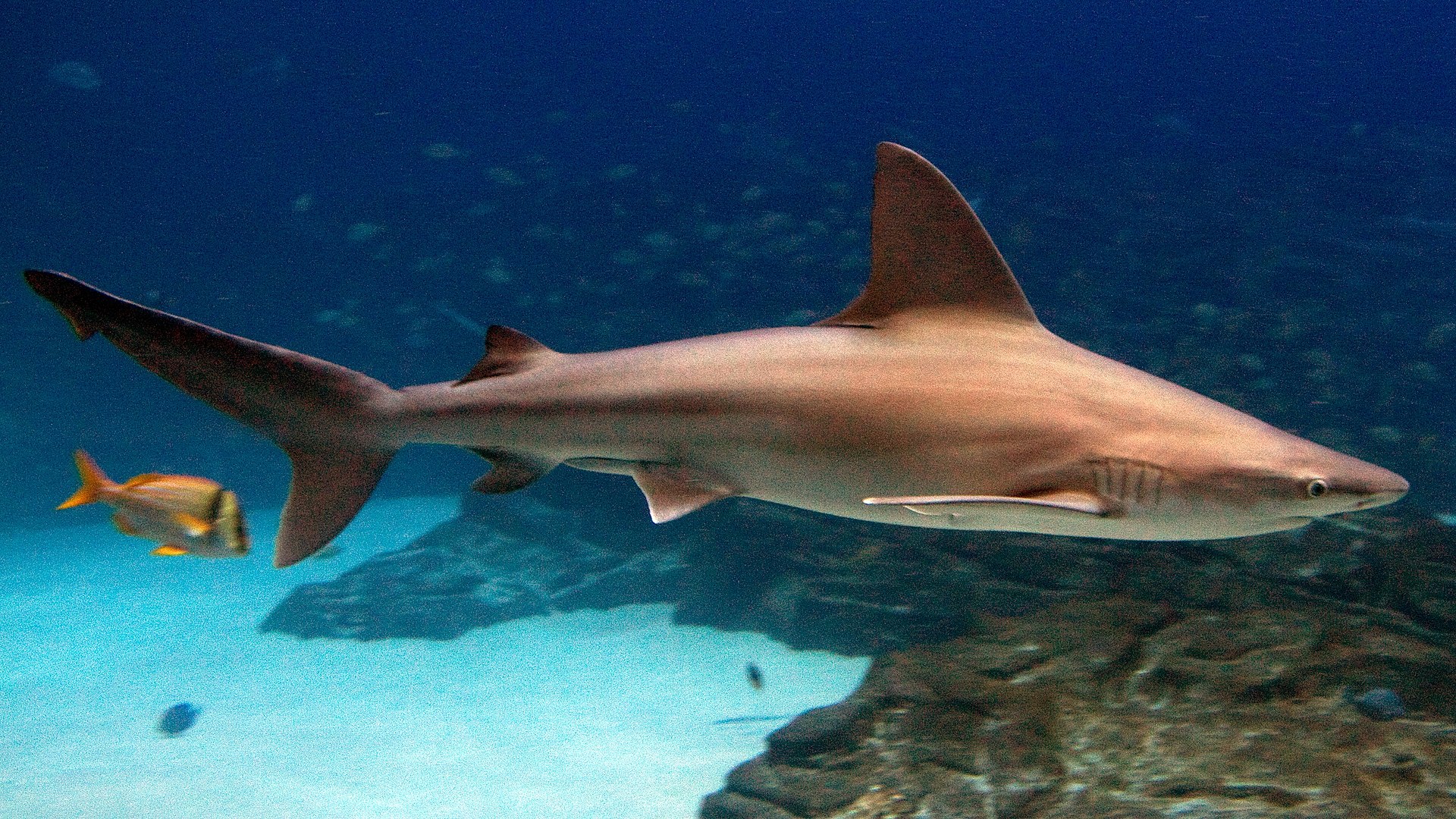 The Sandbar Shark is a fish species native to waters of the Atlantic Ocean and the Indo-Pacific.

It’s a requiem shark and a member of the family Carcharhinidae along with species like the spinner shark and the blacktail reef shark.

This shark is easy to identify by its very high and triangular shaped first dorsal fin. Its body color ranges from a brownish-gray shade to bluish-gray and even bronze in some individuals. They have somewhat thick and heavy-set bodies with rounded snouts that are relatively shorter than those of other sharks.

This shark is a coastal species and is closely related to sharks such as the the dusky shark, the bignose shark, and the bull shark. Its dorsal fin is triangular and very high and it has very long pectoral fins.

Sandbar sharks may be seen swimming alone or in groups segregated according to sex.

The IUCN classifies it as a Vulnerable species.

They typically live for between 35 and 41 years.

The Sandbar shark gets its common name from its preference for living over muddy or sandy bottoms.

The sandbar shark is unfortunately a top target for commercial fisheries because of its large fins.

In fact, U.S. commercial shark fisheries hunted it so much that regulation had to be put in place to protect the species.

For instance, the National Marine Fisheries Service banned all commercial landings of sandbar sharks in 2008. This move was necessary because of evidence of overfishing. Presently, a limited number of vessels are still permitted to hunt it for scientific research only.

Regardless of their large size and powerful build, there are hardly any attacks on humans attributed to the sandbar shark. Hence, they are not a serious danger to humans.

As a result, they are commonly kept in aquariums and people consider them as one of the safest sharks to swim with. However, at a distance, they may be confused with bull sharks.

The Sandbar Shark is a common target of both commercial and sports fishers.

These sharks mate during two different seasons every year depending on their location. Those in the northern hemisphere mate by spring or early summer (May to June) while those in the southern hemisphere do same in the warmer summer months between late October and January.

Mating commences with mature males persistently chasing females and biting them until the female succumbs. As a result, you’ll often find females with vicious bite marks and scars on their bodies.

Once fertilized, females gestate for between 8 and 12 months depending on their geographical location.

The sandbar shark is viviparous. So embryos get their nourishment from placental yolk sac inside the mother shark. Averagely a litter should have up to 8 pups.

9) Diet/Hunting Pattern of the Sandbar Shark

Sandbar sharks may feed all day long but feeding activities are more intense at night. They are opportunistic bottom-feeders that prefer to hunt smaller sized fishes, mollusks and crustaceans.

Larger sharks like the tiger shark and the great white shark prey on the sandbar shark.

It is common knowledge that Bull sharks prey heavily on juvenile sandbar sharks.

As mentioned before, these sharks are a primary target of US fisheries. That’s because of their large numbers, palatable meat, and large fins.

Also, it’s heavily fished in eastern North Atlantic waters and as far as the South China Sea for its fins, flesh, skin and liver. Recreational fishermen target it for capture as a game fish.

But its small litter size, slow growth rate, and relatively long gestation period means this species is vulnerable to feeling the effects of overfishing.

For instance, between the period of the 1970’s and early 1990’s, estimates say that sandbar shark populations dropped by up to two-thirds in the southwestern Atlantic Ocean.

Fortunately, that downward trend has changed as there is a slight increase in population in recent years because of fishing regulations.

The IUCN classifies the Sandbar Shark as a Vulnerable species.

Nardo was the first person to describe the sandbar shark in 1827. Thereafter, it was given several scientific names until the current name of Carcharhinus plumbeus.

The sand tiger shark is a cousin to this shark.

Sandbar sharks are common in tropical and temperate waters worldwide. Some locations include the western Atlantic (from Massachusetts to Brazil), the lower Chesapeake Bay, and their nursery grounds are mainly littered from Delaware Bay to South Carolina.

Other nursery grounds exist in Boncuk Bay in Marmaris, Muğla in Turkey, and the Florida Keys.

You’ll find this shark over muddy or sandy bottoms preferably in shallow coastal waters like bays, estuaries, harbors, or at the mouth of rivers. Occasionally, it may swim in deeper waters.