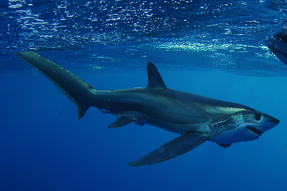 A Bigeye Thresher Shark Out In The Ocean

The bigeye thresher shark is one of three thresher sharks that are known for a deadly weapon they possess; their tails. The elongated upper lobe of its tail fin makes up nearly half its total body length and it wields this tail like a trebuchet to stun and kill prey. From the name you must have guessed that it has enormous eyes. Some adult individuals have eyes that are up to 3.9 inches (10 cm.) across and the eyes are placed in keyhole-shaped sockets so they can be rotated upward.

The large eyes allow it to hunt effectively in low light conditions. It is one of the few sharks that demonstrate diel vertical migration; the bigeye thresher stays in deep water during the day and moves to the surface waters at night to feed. Due to the temperature changes associated with this kind of movement, this fish has a vascular exchange system called the rete mirable to protect its eyes and brain.

Its body is colored a deep, metallic violet to purplish brown with a creamy white underside but it turns to a dull gray shade when it dies.

The bigeye thresher shark rarely ever comes in contact with divers underwater and thus poses no danger to humans.

Same as other mackerel sharks, the bigeye thresher is ovoviviparous and bears a litter of two pups, with one in each uterus. It has one of the lowest birth rates among sharks. For instance, a female bigeye thresher will only produce about 20 young over her entire life. In extremely rare cases, it may bear up to three or four pups in one litter.

Though the gestation period is unknown, it’s likely 12 months long. In addition, there is no documented breeding season. While in the womb, the developing fetuses get nourishment from the yolk sac, but they exhibit oophagy later on. That means they consume infertile eggs around them though there is no evidence that they cannibalize their underdeveloped siblings.

The unborn embryos are alike in appearance to the adult bigeye thresher shark, with the characteristic larger heads and eyes.

One distinct feature of the bigeye thresher is that it has larger teeth than other threshers. Because of this feature, it can feed on a wider variety of prey. Some known prey include schooling forage fish, for example mackerel and herring, and benthic fish like hake and whiting. In the Mediterranean, for instance, they are commonly seen with schools of frigate mackerel. This suggests that these sharks will follow concentrations of their potential prey from one place to another. Also, it can capture and eat larger pelagic fish such as lancetfish and small billfish. Others include squid and possibly crab megalopae.

This shark uses its long tail as a weapon to stun prey before capture. Due to this hunting habit, they are often found by fishermen hooked by their tails on longlines with some of the bait fish already in their stomachs. Like other thresher sharks, it accelerates towards a ball of fish and brakes sharply by twisting its large pectoral fins. At the same time, it lowers its snout and pitches its whole body forward while flexing the muscles at the base of its tail. The result is a sling-like strike with an average speed of 30 m/hr. (48 km/hr.) that can rip small to medium size fish apart. Some threshers can strike at an astonishing speed of up to 80 m/hr. (129 km/hr.)

No doubt, the unique shape of their eye sockets means they have binocular vision in an upward direction allowing for a better aim. Another hunting tactic is that they may use their long tails to smack down birds flying near the water surface.

Apparently, the bigeye thresher shark is a highly migratory, oceanic and coastal species. It is found in virtually all tropical and temperate seas worldwide. Because of its extremely low reproduction rate, bigeye thresher populations are highly vulnerable to any fishing endeavors or other human activity.

Its habitat occurs in the same zone with many unregulated gillnet and longline fisheries. For this reason, it is commonly caught as bycatch in regions where it lives. The negative result of this is a significant reduction of bigeye thresher population in the northwest Atlantic and the eastern tropical Pacific. Obviously, this decline will exist in other undocumented regions as well.

The bigeye thresher gets its scientific name, Alopias superciliosus, from the Latin word super meaning “above”, and ciliosus which means “eyebrow”. This is because of the distinct lateral grooves above the eyes. Studies on this fish showed that its closest relative is the pelagic thresher. Fossils found in Hokuriku region of Japan date back to the Middle Miocene epoch about 16.0 to 11.6 million years ago.

The bigeye thresher shark is virtually circumtropical; it is distributed throughout the tropics. They are usually found over the continental shelf and in the open sea, though occasionally seen in shallow coastal waters.

It is known from the western Atlantic Ocean (New York, Florida, the Bahamas, Cuba, Venezuela, Tobago and southern Brazil), to the eastern Atlantic (from Portugal, Madeira, Senegal, Guinea to Sierra Leone, Angola, and the Mediterranean Sea).

In the western Indian Ocean, bigeye thresher sharks are found around South Africa, Madagascar, and the Arabian Sea. Its habitat in the Pacific Ocean extends from around southern Japan, and Taiwan to Australia, New Zealand, and as far as west of the Galapagos Islands.

Although exact figures and data are lacking, this vulnerable species now faces major threats from fishing pressure and that is not likely to reduce in the near future. It is caught heavily as bycatch and it constitutes between 1o percent and 20 percent of pelagic shark catch in places like Japan, Spain, Mexico, The United States and Cuba. In Taiwan, fisheries capture about 220 metric tons annually. Bigeye thresher shark meat is sold fresh, smoked, or dried and salted. Its skin is used for leather products, the liver oil for vitamins and supplements, and the fins for shark fin soup.

Unfortunately the bigeye thresher shark, along with its fellow thresher sharks, is listed as a game fish by the International Game Fish Association (IGFA). For this reason, it is regularly pursued by recreational anglers off the United States, South Africa, and New Zealand.

Continuous depletion of their numbers moved the IUCN to list all three thresher sharks; the bigeye, the pelagic and the common thresher shark as vulnerable.