The Bluntnose Sixgill Shark is one of the largest sharks around today and it belongs to a family of little known sharks commonly called ‘cow sharks.’

They spend most of their lives in cold, deep waters well away from the reach of the average divers and only come to shallow waters to breed and feed. Bluntnose sixgill sharks are so named because they have a rounded, wide snout and six pairs of gills. Most common sharks have five pairs of gills. Also, sixgill sharks have wide heads, relatively small fluorescent blue-green eyes, and a heavily-built, large, stocky gray-colored body. Some individuals are colored tan, brown or even black

It is easily recognized by its six rows of comb-like yellow teeth, broad pectoral fins with rounded edges and long tail.

Life expectancy figures are not exact but they may live up to 80 years old.

The largest of its kind measured 8 meters (26 feet).

Though the bluntnose sixgill shark is sluggish in nature, it can attain high speeds when in pursuit of prey. Its swimming speed is aided by its powerful and long tail.

The sixgill is a territorial shark but regardless of that and its intimidating size, the sixgill is considered harmless to humans unless it is provoked. In fact, some individual sharks may approach divers for a closer look without any display of aggression. But, they will snap at you if you try to touch them. 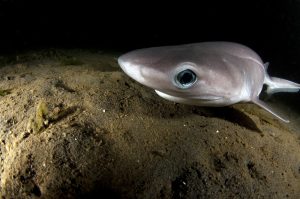 Bluntnose Sixgill Shark Pup; A Litter Can Have Over 100 pups

Eggs hatch in the mother’s body and the embryos remain there and receive nourishment from a yolk sac. Though the actual gestation period is not known, it should be about 24 months. At birth, the pups measure from 24 to 30 inches (60 to 75 cm) and each litter can have anywhere from 22 to 108 pups.

These are powerful predators and as mentioned before, they can swim quite fast to catch prey. Due to its wide habitat and range, it appears to feed on a wide variety of prey such as rays, large bony fish, crabs, seals, other sharks, etc. They will also scavenge on dead whales, seals, and baited fish from fishermen long-lines.

Although this species produces a large litter of pups and it is found over a wide range, it’s now listed as Near Threatened by the IUCN. Many factors contribute to this. The bluntnose sixgill shark is a popular target among recreational sports fishermen. In addition, it is fished commercially for its meat. Sixgill meat is sold frozen, fresh, slated, or smoked and is regularly exported to European markets and to other consumers around the world.

It is also hunted for its liver oil and skin (for leather products). Also, its sluggish nature means it is regularly caught as bycatch, especially by Canadian fisheries. Its population is severely depleted in the Northeast Pacific but data is largely deficient in other regions.

This is a primitive shark and like its fellow members in the Hexanchidae family, its close relative are mostly fossils now. The few living relatives include other sixgill and sevengill sharks, the dogfish, and the Greenland shark.

The bluntnose sixgill is a deep-benthic, littoral and semipelagic shark that prefers dimly-lit, temperate and tropical waters. It’s found in different parts of the Atlantic, Indian, and Pacific oceans. This species is sighted off the coasts of North and South America. It’s also seen from Iceland to Namibia and from Madagascar to Japan and Hawaii.

Juveniles of this species may approach the shoreline in search of food. Adults prefer to remain deep underwater at depths of over 100 meters (330 feet) and only venture to the ocean’s surface at night.