The Leopard Shark is a small and harmless shark common to waters in parts of the USA and Mexico.

The Leopard Shark is a species of houndshark; a group of sharks known for their generally rounded snouts fairly large first dorsal fin. This shark is a very common species along the Pacific coast of North America, from the U.S. state of Oregon to Mazatlán in Mexico.

They are small sized fish with slender bodies and are very easy to identify by the striking pattern of black/brown saddle-like markings and same colored spots on a pale body. It gets the common name ‘leopard shark’ from these markings. Also, their eyes are large and oval, with a nictitating membrane (protective third eyelid).

Leopard sharks are active-swimming predators, though they tend not to stray or migrate far from a particular area.

This shark is harmless to humans and is often caught by commercial and recreational fisheries for human consumption and as a display fish in aquariums.

The IUCN classifies the Leopard Shark as a Least Concern species.

Note that the term “Leopard shark” can be confusing as it’s also used to refer to other shark species like the Zebra Shark (Stegostoma Fasciatum) or the Tiger Shark (Galeocerdo Cuvier).

They are very active swimmers and move through the water with a strong undulating motion. 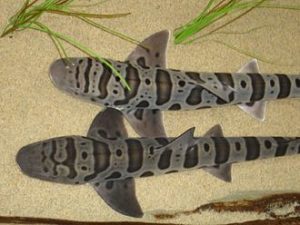 Leopard sharks are known for avoiding divers and snorkelers in the water so they’re considered harmless. They are wary of people and very quick to flee.

However, there was an incident in Trinidad Bay, California in 1955 where one attacked a diver with a nosebleed.

The diver was not seriously hurt and since there are no other recorded incidents to date, it’s safe to say they are harmless to humans.

The only recorded incident with a Leopard Shark occurred when a diver entered the water with a nosebleed.

The leopard shark is ovoviviparous; developing embryos are fed through yolk sac until birth. Females may produce anywhere from 1 to 37 pups in one litter between the months of March and July yearly.

Newborns measure just 20 cm (7.9 in) long and from birth, they segregate into large schools based on age and sex. In the wild, these groups are seen mingling with other sharks especially the spiny dogfish.

The leopard shark is a relatively slow-growing fish and it takes many years to reach maturity.

9) Diet/Hunting Pattern of the Leopard Shark

This species is more active at night than during the day so they spend most of the day lying around. At night though, they turn into very active hunters and capture prey by a combination of sucking and biting.

Presently, the leopard shark is not under severe threat from human activities. Although it’s targeted by fisheries and adapts well to captivity.

Some live for over 20 years in captivity.

Generally, fisheries catch them for the following purposes;

Today, it’s still fished mainly off the coast of California. Fortunately, there are now regulations in place to protect it from overfishing.

The IUCN classifies it as a Least Concern species.

The California Department of Fish and Wildlife has repeatedly warned against consumption of Leopard Shark flesh. Especially those caught close to human development because of the high risk of poisoning from mercury, pesticides, and PCBs.

Semifasciata comes from the combination of the Latin words semi (half) and fasciatus (banded). That obviously refers to the markings on its body.

The leopard shark prefers the cool to warm continental waters of the northeastern Pacific Ocean. Specifically, they are common from Coos Bay (Oregon) to Mazatlán (Mexico), including the Gulf of California.

It stays around muddy or sandy flats and generally swims close to the bottom.