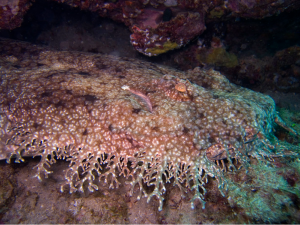 The Tasselled Wobbegong shark belongs to a group of 12 species of sharks known as carpet sharks. This little known but widely distributed shark is a native inhabitant of the coral reefs off the coast of northern Australia, New Guinea, Indonesia, and neighboring islands. The word “wobbegong” has its origin from an Australian Aboriginal language, and it means “shaggy beard.” Apparently this refers to the fringe of dermal flaps (barbles) around its head and chin. From the underside of the chin to the sides and front of its head are numerous dermal lobes and this beard-like fringe continues from the tip of the snout to the bases of the pectoral fin.

It is regarded as the most specialized shark in this group, though it’s also the slowest swimmer of the lot. This shark is a nocturnal shark and only comes out of its preferred hiding place in caves and under ledges to feed at night.

This species has a very broad, flattened body and a complex, mosaic-like color pattern that allows it to camouflage perfectly against the surrounding reefs. As a result of this feature, it is a master ambush predator of the ocean with a couple of tricks (camouflaging and tail-waving) that it uses to lure prey.

There isn’t much information about the lifespan of the tasselled wobbegong. However, just like other sharks, they should live long healthy lives if not hunted by humans.

It’s a slower swimmer than other wobbegong sharks though its exact swimming speed is not documented. 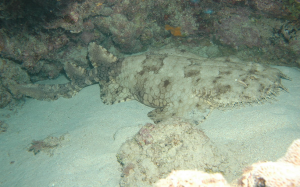 The Tasselled Webbogong Shark Is Hard To Spot When It Camouflages (Author Leonard Low cc2.0)

Due to its sedentary nature during the day and bottom-dwelling habits, divers and people in the water have stepped on it in the past. Such encounters have resulted in several reports of nasty bites. Their greenish/brownish skin, and intricate pattern makes them camouflage so well against the ocean floor that people may find it hard to notice them. For this reason, the tasselled wobbegong shark has earned a reputation for “unprovoked attacks” against humans.

They may also mistake a human foot for potential prey. However, many divers have successfully approached individuals of this species for photographs without any incident.

Though their mating pattern and breeding seasons have not been studied in detail, tasselled wobbegong sharks are known to reproduce through aplacental viviparity.

Their young develop from fertilized eggs inside the mother’s body. Nourishment comes from the egg yolk and not the mother’s diet. After hatching, they remain in the mother’s body to develop further and are born alive after a gestation period of between 10 and 11 months. At birth, the pups measure about 20 cm (7.9 inches) long. From here on, the pups receive no care whatsoever from the mother. They will stay together for safety while they try to survive in the wild on their own.

Tasselled wobbegong sharks are lazy hunters. They prefer to find a comfortable spot and rest with their tails curled up for the whole day, only coming out to hunt actively at night.

However, they have perfected a strategy that gets them food even while resting. They are masters of patience and will wave their tails slowly in the water to mimic the movement of small fish. By doing this, they can lure nearby fish and invertebrates to come closer. Once the prey is close enough, this sharks strikes with surprising speed which the prey is usually no match for. It can impale even larger sized marine animals with its rows of long, fang-like teeth. Its favorite diet includes squirrelfish and soldierfish, but it will also capture small octopus, crabs, lobsters, and even smaller sharks.

They can swallow small prey whole but if the prey is too large, they will bite into it and hold tight with their jaws until it dies and then proceed to eat it bit by bit.

Though the flesh of some species of wobbegong sharks is highly sought after for taste and texture, the tasselled wobbegong shark is not routinely targeted by fisheries within Australia. Also, its chances of getting caught by trawl fisheries is low because trawling does not take place in its preferred reef habitat. Part of its habitat is now protected in the Great Barrier Reef Marine Park. On the other hand, the IUCN has expressed concern about the impact coral reef habitat destruction by pollution and dynamite fishing around New Guinea could have on this species.

For now, tasselled wobbegongs still have a large and stable population.

Morphological studies are still inconclusive about the evolutionary relationships of the tasselled wobbegong. The last set of phylogenetic analysis done in 2009 found that this species is basal to all other wobbegongs, except for the northern wobbegong. The tasselled wobbegong shark developed its own unique and distinct evolutionary features somewhere around 11 to 6 million years ago. Incidentally, this time coincides with an era of major geological change and it marked the formation of coral reef habitats in its region.

This shark prefers tropical waters and it can be found at depths of up to 40 meters (131 feet) on the continental shelf and on offshore reefs, inshore coral reefs, reef channels, and reef faces. The waters around northern Australia, Papua New Guinea, and Indonesia are its main dwelling place. There are a few reports of sightings around Malaysia but these sightings are not confirmed.

Though the tasselled wobbegong shark is nowhere near endangered for now, its beautiful skin may become its downfall in the near future. For instance, it’s becoming a common display animal in aquaria in the United States as it makes for a really spectacular display. Also, since it doesn’t move around much, it appears to do well in captivity and requires minimal care. This trend may move more people to actively seek to buy it as a pet whereas sharks are better off in their natural habitat. In addition, it is attracting unwanted attention in other regions because of its beautiful, tough skin. Hence, people are now using tasselled wobbegong skin to make leather products.