Just like every other aspect of the shark world, shark reproduction is another fascinating subject.

The majority (about 70 percent) of known shark species alive today produce live young. For such species, their young are born fully developed with the same features as the adults. Most newly-born pups will quickly swim away from their mother. If not, she will gobble them up for a tasty snack. Basically, the pups face the harsh realities of the wild immediately they come out of her body. Shark gestation periods average from just six months to 22 months. For now, the common frilled shark holds the record for the longest gestation period of 3.5 years.

The remaining minority of shark species reproduce in different ways by laying eggs, or even asexual “virgin” reproduction. However, the drama doesn’t end there. The embryos of some species eat their siblings in the womb!

But let’s start with one of the most jaw-dropping aspects of shark reproduction. Mating.

Shark mating is certainly not for the fainthearted. All sharks practice some form of biting with different intensity. Specifically, the male shark will bite the female shark to get her attention in preparation for mating, sometimes biting her even violently. The biting continues during the actual mating too. Male sharks will bite the head, gills or pectoral fin area of the females in order to mate. It’s not uncommon to see female sharks with multiple bite marks on their bodies after a mating session.

Since male sharks don’t have hands to hold on to the females, biting may actually be the most logical way to hold her in place during the process. Though this biting looks horrific, the male will not attempt to bite off the female’s skin or tissues. Fortunately, female sharks have thicker skins than the males. The females of the blue shark and tiger sharks, for instance, have skin layers up to three times thicker than the males. And, the wounds heal quickly. 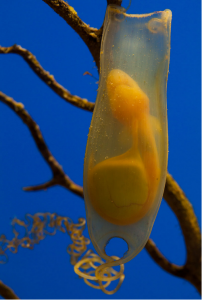 Male sharks have a pair of reproductive organs called “claspers.” Once the male is able to latch on properly to the female and immobilize her, he will then insert his clasper into the female opening called a “cloaca.” The clasper hooks into the cloaca firmly before the sperm is released. The males use seawater filled sacs in their bodies that act like a hydraulic pump to shoot the sperm as far up the female’s reproductive tract as possible.

Fertilization will occur right away while some species will store the semen in specialized glands for up to a year or more before using it to fertilize their ova. Species like the small spotted catshark can store the sperm for up to 24 months.

The 4 Types Of Sharks Reproduction

There are actually 3 main types of shark reproduction (oviparity, ovoviparity, and viviparity), and 1 variant (asexual reproduction).

Some sharks lay their already fertilized eggs in the water. The eggs contain the developing embryo and each egg is encased in a tough, leathery case that looks very much like a purse. As a result, these eggs are commonly called “mermaid’s purse.” The eggs vary in appearance depending on the species of shark. Some have a corkscrew shape, some look like flat purses, others are like horns but they all have sticky mucus tendrils that the mother uses to “anchor” the eggcase to objects on the seabed such as reefs, seaweed, plants, in-between rocks, and so on.

Just like chicken eggs, shark eggs have a yolk that feeds the embryo, in fact, everything the pup needs to develop is contained right inside the case. This is important considering the fact that these eggs can sometimes take up to 9 months before they hatch.

Though mother sharks do not care for their babies at all after birth, they make sure the eggs are laid in a safe and secluded area well away from predators. Once the eggs are laid, her work is done. Neither she nor her mate will guard the eggs till they hatch. Horn sharks, zebra sharks, Port Jackson sharks, the swellshark, the necklace carpetshark and catsharks are a few examples of oviparous sharks.

Most sharks fall in this category. Rather than been laid in the water, the fertilize eggs develop into embryos and hatch in the mother’s body.

In this case, the membrane containing each egg is thinner and not as tough as that of eggs laid in water. The embryos are nourished with food supply from the egg yolk. Once that supply is finished, and the embryos are fully developed and hatched, she will then give birth to them. But not immediately. The pups will still remain in the uterus for a while.

Strangely enough, there is no placenta to provide nourishment. In order to survive, the developing pups will engage in oophagy (oviphagy). Meaning, in some species the pups will feed on any unfertilized eggs around them. In other species, the young will engage in intrauterine cannibalism; the more developed and stronger pups eat their less developed/weaker siblings. Obviously, sharks that exhibit this kind of reproduction have less live pups per litter as not many pups can survive this kind of cannibalism. 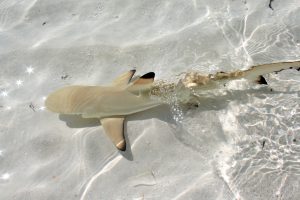 The eggs hatch in the uterus, and the embryos are fed by an umbilical cord and placenta. Just like in mammals. Viviparity is the most advanced category of shark reproduction.

The placenta transfers nutrients and oxygen to the embryos from the female’s bloodstream and then transfers waste products from the developing pups back to the mother for elimination. The whale shark was long assumed to be oviparous but females were later discovered carrying hundreds of pups in their body. Other viviparous sharks include the bull sharks, the whitetip reef sharks, the lemon sharks, the blue sharks, the silvertip sharks, the porbeagle, and the hammerhead sharks.

A select group of female shark species can reproduce without a male fertilizing the eggs. This kind of reproduction was accidentally discovered by scientist studying a female hammerhead shark in captivity. This ability is known as parthenogenesis or “virgin births” and it is extremely rare. Also, the process tends to produce fewer pups than the more common sexual reproduction.

The species known to exhibit this property are the Blacktip, hammerhead, and Zebra sharks.

Despite the fact that sharks can reproduce through so many methods, they still have generally low reproductive rate compared to bony fish. For instance, the bigeye thresher produces about 2 pups per litter while the whale shark produces about a hundred pups at a time. In contrast, some species of bony fish can lay eggs in millions. Another problem is the late maturity age of sharks. The Greenland shark for example matures at about 150 years. With the present rate of habitat invasion by humans, how many baby sharks can expect to survive till that age?