When thousands of fish including dead sharks began turning in San Francisco Bay in spring this year, many people were astounded.

When Leopard sharks and bat rays began washing up in large numbers on San Francisco beaches in early spring this year, many people were baffled.

For the period between February and July this year, over 2000 animals including 1000 leopard sharks, hundreds of rays, striped bass, smoothhound sharks, guitarfish, and halibut are believed to have died off the San Francisco coast.

The sea creatures were turning up dead or very weak in their dozens every week.

Experts were worried and rightly so too. Sharks are slow growing and most species only give birth to a handful of pups over an extended period.

Furthermore, the infection is spreading to other marine life.

But in a quick reaction, the state of California Department of Fish and Wildlife (CDFW) announced that it had no plans of funding a research.

Desperate to find some answers, volunteers with the Pelagic Shark Research Foundation collected a few samples of stranded sharks and mailed them over to Dr. Mark Okihiro. Okihiro is a senior fish pathologist with CDFW based in Santa Cruz.

Below are his and other researchers’ findings.

For the past 50 years, there have been cases of strandings which have gone unanswered. However, Dr. Okihiro believes he has narrowed down the culprit.

Okihiro works as a white seabass hatchery inspector. He often performs necropsies on stranded sharks during his free time in his home. He cut the Bay shark samples open and found that there were lesions all around the sharks’ brains.

And with the help of researchers from UC San Francisco, he identified the DNA of a single-celled micro-organism similar to the standard amoeba, a pathogen called Miamiensis Avidus.

Miamiensis Avidus is well-known fish-killing parasite and its spread in fisheries or the wild can lead to the death of hundreds of thousands of fish at a time.

Typically, the pathogen gets into the brains of its victims through the nasal tract. From there, it eats off the brains causing an infected shark, for instance, to swim in circles finally resting on a beach slowly dying.

Or the sick animal sinks to the bottom of the sea. Unsuspecting people eager to help would push the shark off the beach back into the water only for it to die elsewhere.

Luckily, people who swim in the same waters or eat the affected meat are not at risk.

If Okihiro’s assumptions are solid, then shark mortality could be way 2000. He’s also concerned that the same pathogen killing the leopard sharks has tackled hundreds of other sea creatures. In that case, the ones that get washed up on the beach are just a fraction of the actual population that die.

However, National Geographic reports that the CDFW would not permit Okihiro to be interviewed for this story.

Researchers also can’t explain why the infection is affecting some shark and fish species but not other fish in the same waters.

Okihiro is very confident they’ve identified the culprit in the fish deaths. But why and how it’s happening remains much greater questions. 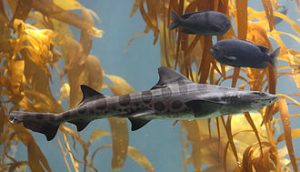 Another angle to this story is the issue of pollution.

Much of the bay water was diluted with fresh water (rain water) from the delta. So says Jim Hobbs, a research scientist at UC Davis. The deluge might have affected the behavior of the sharks.

Too much fresh water affects sharks’ capability to balance the salt levels in their bodies. They cannot remove toxins which build up in their bodies and with time, their immune system drastically fails. Their breathing and kidney become affected.

In addition, the state of California manages its waters through controlled gates. These controlled gates and lagoons accumulate toxic waste that forms favorable breeding grounds for pathogens. They hatch here and wait for that moment to attack. This coincides well with the floods which wash off to the sea carrying pathogens.

Since sharks come to the bay to spawn, they are the ideal victims.

Again, another possibility could be that the rains flushed too much human-generated toxins into the Bay, thus weakening the sharks.

“Those are things that are going to be pretty difficult to pin down,” Okihiro said. “But at least we have a starting point now.”

Leopard sharks are beautiful, distinctly colored sharks and are a kind of signature to the California waters.

The Problem Of Lack Of Resources

Although Dr. Okihiro is confident about his findings, they are still regarded as an “assumption” without official government backing and funding.

To positively identify the culprit would require resources. Unfortunately, this is not a priority to CDFW for now.

Deputy Director, Jordan Traverso, says the department would not fund the research as leopard sharks are not a priority. There are other more endangered species to tackle. The CDFW is also still recovering from what’s considered one of the worst droughts in the states history so far.

So, allocating dollars for this research is not foreseeable in the near future.

Dr. Andrew Nosal, a marine biologist at UC San Diego backs Okihiro’s claims of high mortality rate. He further adds that with no resources, there is nothing to do about the menace except to watch as more and more dead sharks show up.

Sharks are part of an ecosystem and removing them from the chain would cause a negative reaction.

To Dr. Nosal, thousands dying in California is disastrous. However, if the pathogen were to spread to the entire west-coast ecosystem, that would be catastrophic.

Leopard shark abundance in the Californian waters is what Nosal believes to increase their vulnerability.